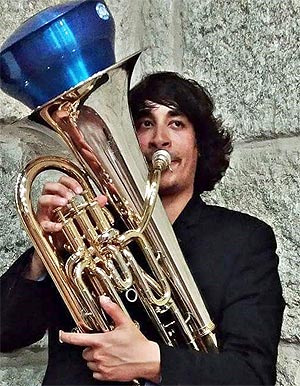 Mauro António Martins was born on the 4th of July, 1995 in Aargau, Switzerland. He initiated his musical studies at the age of ten, playing trumpet in the Philharmonic Band.

In 2010 he joined the Escola Profissional de Artes da Covilhã (EPABI) where he began his studies in euphonium, with Nuno Machado.
In 2013 he wins the schools internal competition and finishes his 3rd year of Basic Instrument Course oriented by Ricardo Antão, attaining the highest grade possible of 20 values (in the professional aptitude exam). In 2014, in his first year of secondary school, he won the first prize in the “Terras de la Salette” contest in the junior 15-18 year old category. At the same year, he won a place to join the Portuguese Wind Instrument Orchestra in which he is the leader of euphonium’s class. In 2015, he wins again the “Terras de la Salette” contest, this time in the seniors 19-26 year old category. At the same year he collaborated with the Teatro das Beiras and he was the musical director of the piece “Loa, Xácara, Bugiganga”, winning the first place with the EPABI Wind Instrument Orchestra in the Filarmónie D’ouro contest. 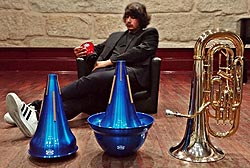 In 2016 he went to the semi-finals of the ITEC contest (International Tuba Euphonium Association, USA) that happened in Tennessee, USA, in the category of 19 years old and older; he was the only Portuguese and not attending university participant. This contest is one of the most reputable euphonium contests in the world. Was a finalist in Concours tuba tours 2017, prestige categorie.

There are many pieces dedicated to him,highlights the Concert piece for euphonium and orchestra, written by Tiago Rasinhas, which premiered was with the Covilhã Symphony Orchestra, and the Concerto for euphonium e clarinet solo, written by Pedro Santos, winner of the Compostion Contest for Wind Orchestras 2012. The Concerto was recorded on CD in August 2016.

He had participated in numerous internships and masterclasses as a teacher.

Mauro is currently on the 1st year of Graduation in Music – Instrument (1st cycle) in ESMAE – Escola Superior de Música e Artes do Espetáculo do Porto, studying with Sérgio Carolino and Ricardo Antão. Is a member of the ensemble “How Low Can You Go?”, artistic director Sérgio Carolino.

Endorser of the stores Music Arte and Brassfeelings. He is an Adams artist.