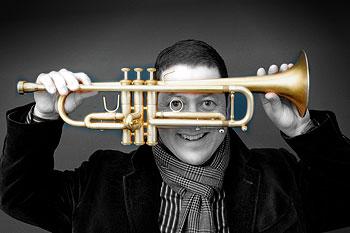 Trumpeter Jim Rotondi has been a major figure in the world of jazz for over 20 years, both in New York and on the international scene. His sound, soul, and sense of swing have been in demand as leader, and sideman all over the world.

A Montana native raised in a musical family, Jim started with the piano at eight years old and switched to trumpet at age twelve. Two years later Jim heard a recording of Clifford Brown and he was on his way. A product of the prestigious music program at the University of North Texas, Jim won first place in the International Trumpet Guild’s Jazz Trumpet Competition in 1984.
Since relocating to New York, Jim has toured and recorded with a host of jazz luminaries, including the big bands of Ray Charles, Lionel Hampton, Grammy-winner Toshiko Akiyoshi, Bob Mintzer, and the small groups of Charles Earland, Lou Donaldson, Curtis Fuller and Joe Chambers. Jim currently leads two of his own groups, a quintet featuring vibraphonist Joe Locke in the front line, as well as an electric group, Full House, which also features pianist David Hazeltine. He is also a founding member of the collective sextet One For All, which features a front line of saxophonist Eric Alexander and trombonist Steve Davis, as well as the aforementioned Hazeltine, drummer Joe Farnsworth and bassist John Webber in the rhythm section. This all-star group is featured in the June 2009 issue of
Jazztimes magazine. 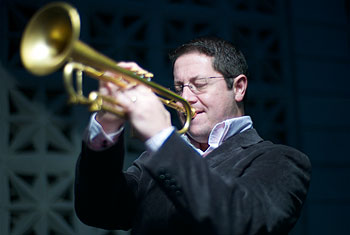 Jim’s extensive recording experience most recently includes the release of his third date as a leader for the Posi-Tone label, titled “1000 Rainbows”, featuring Joe Locke, following a host of successful releases on various labels. Having
appeared on some 70 CD’s as a sideman, he can also be heard on several of Charles Earland’s Highnote Records releases, alongside saxophonist Eric Alexander, with whom Jim made his recording debut on Eric’s Delmark release
“Straight Up.” Other recordings include saxophonist George Coleman’s Octet, featuring Harold Mabern, as well as drummer Ray Appleton’s Sextet, which features Slide Hampton, Charles McPherson, and John Hicks. The abovementioned One For All, whose Sharp Nine Records releases ”Too Soon To Tell” and “Optimism” received critical acclaim from Cadence and The Detroit Free Press, also has 12 CD’s to their credit.
Jim currently splits his time between Graz, Austria, where he is a professor at the University of Music and Dramatic Arts, and the New York City area, where he has been actively professionally for 25 years. He has given clinics at Emory University in Atlanta, the Jamey Aebersold Summer Jazz Workshop and served on the faculty of the Stanford Jazz Workshop in Palo Alto, California, Seminari Jazz Internazionali in Orsara, Italy, as well as having been Jazz Trumpet Professor at Rutgers University, and an affiliate faculty member at the State University of New York in Purchase.