Exit_Brass! is an exceptionally dynamic brass quartet from Belgium. Four talented young musicians combine a high musical standard with excellent performance skills.
Whatever type of audience Exit_Brass! is playing for, they are determined to entertain you!
The Exit_Brass! repertoire includes original compositions as well as adaptations and arrangements by the musicians themselves. Exit_Brass! consists of typical brassband instruments (two cornets, a tenor horn and a euphonium) which the musicians are happy to introduce to you very detailed and maybe a little… extreme? 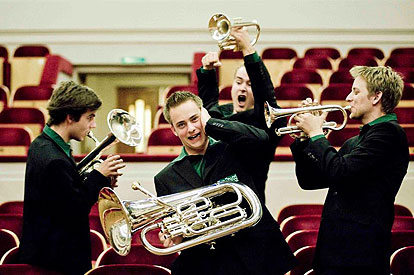 Exit_Brass! is a one of a kind brass ensemble. Not only you hear four excellent brass players having fun, you see an extraordinary performance. With their unexpected twists (and yes, you can take this literally) they shake up the classical ‘concert conventions’ and challenge the boundaries between musical genres. In 2010 Exit_Brass! was British Open Quartet Champion and received the 4 Bars Rest Award for New Talent of the Year. They have won numerous awards and toured extensively, performing at prestigious events and venues around the world such as the RNCM Festival of Brass 2013 (Manchester, UK) and the Geneva Brass Festival 2013 (Geneva, CH), in the Cido Arena in Panevėžys (Lithouania) and the Oriental Arts Centre in China – being the first non-symphonic orchestra to perform here.