Mike Kaupa has performed throughout North America, Europe, and Japan. From 2001 through 2005 he was a member of the faculty at the annual Seminario de Jazz, in Barcelona, Spain and has been associated with the “Taller de Musics” school since 1983. On Saturday December 2nd, 2007, Mike performed at the Palau de la Musica in Barcelona. He was an interim instructor of jazz trumpet at the Eastman School of Music for the 1999/2000 school year and the spring semester, 2010. Recent performances with his quartet include the Rochester International Jazz Festival and the Lewiston Jazz Festival. 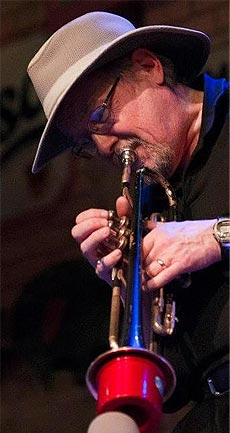 In February, 2008, Mike was the soloist in New York City in a new composition, “Cycles Suite” by Chris Jentsch. The concert and recording was partially funded by the New York State Council on the Arts. Other recent recordings include a duo CD, This is Spring,” with Toronto pianist Gordon Webster, and as a featured soloist on the new Dave Rivello CD “Facing the Mirror.” This past winter he was a soloist with the Ithaca College Jazz Ensemble.